There’s a place called Swan Lake, nestled away in a small town on the South Coast of New South Wales. It was at Swan Lake where a girl who was too clumsy and too self-conscious for ballet found herself feeling at ease with a paddle in her hand and her eyes on the horizon. First, in a kayak. Today, on a stand up paddle board.

I remember when I was ten my Dad found a kayak in an ad in a newspaper - the Trading Post, perhaps - and we drove out to see it. It was lime green and scuffed on the sides, but the man was willing to give it to us for free and my imagination went wild at the idea of exploring the lakes and rivers we drove over so often in his little fishing boat at my own pace. We took the kayak home and cleaned it up, and it was mine. I would slide into it and glide across the water, disappearing into my own world. 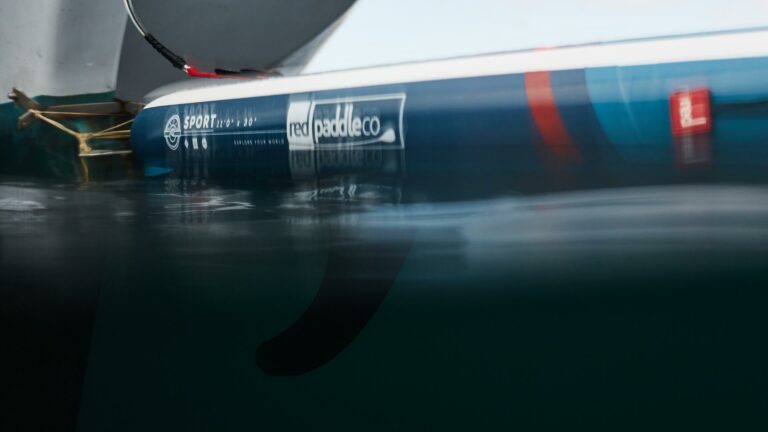 It was an escape from reality. Out on the water there were no bullies, no pressure, no fighting, and no fear. It was just me, the sound of the paddle whooshing through the water, and whatever beauty nature had for me in that moment. On one occasion I discovered what should have been painfully obvious - that Swan Lake is a spot where swans make their nests. Surprised? At thirteen, I was.

At fifteen I pulled the kayak to the water’s edge and tried to get in but found that my hips were too wide. I remember the sinking feeling in my stomach, and the way I dragged it back towards the car and sat down and cried. My weight had gone up in response to emotional trauma and the resulting depression, and suddenly the vessel of my escape from the pressure of life was too small for my body.

“I retreated. I insisted that I had no interest in that kayak anymore. The water? Boring. The lake? Gross. My pain and insecurity felt insurmountable that day.."

Earlier this year - fifteen years from the day I walked away from that kayak - just as the pandemic was being whispered of, my husband and I went for a walk along the harbour near where we live. I watched someone carry a board down to the water, push it into the shallows, move to kneel on it and then push out to the water. They paddled for a few minutes like that before standing up and manoeuvring around the boats at the edge of the harbour.

James, who is an encourager with the best of them, said, “then let’s get you doing that.” 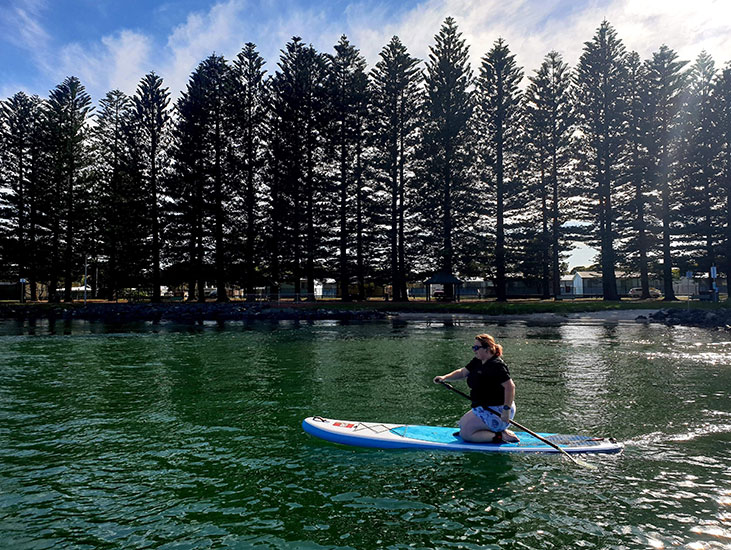 In the midst of afternoon walks in the height of COVID, I watched people paddle around that harbour and longed to be there - feeling the freedom I had somehow forgotten about. But, I thought, surely someone my weight would not be able to use a stand-up paddle board. I had been too big for that kayak at fifteen and at thirty I was curvier than I had been then - and honestly, I’m at peace with my body and treat it with kindness that my fifteen year old self couldn’t have dreamed of. I would still be too big. It would be the lime green kayak all over again, and when a global pandemic is going on the last thing you need is to be body shamed by an inanimate object.

In a fit of determination, I sent an e-mail to a local stand-up paddle board instructor. I told her about the lime green kayak, and the way it felt to escape all the pressure of life and simply be on the water. I also told her that I felt like perhaps this wasn’t the sport for me because a board couldn’t hold my weight, could it? 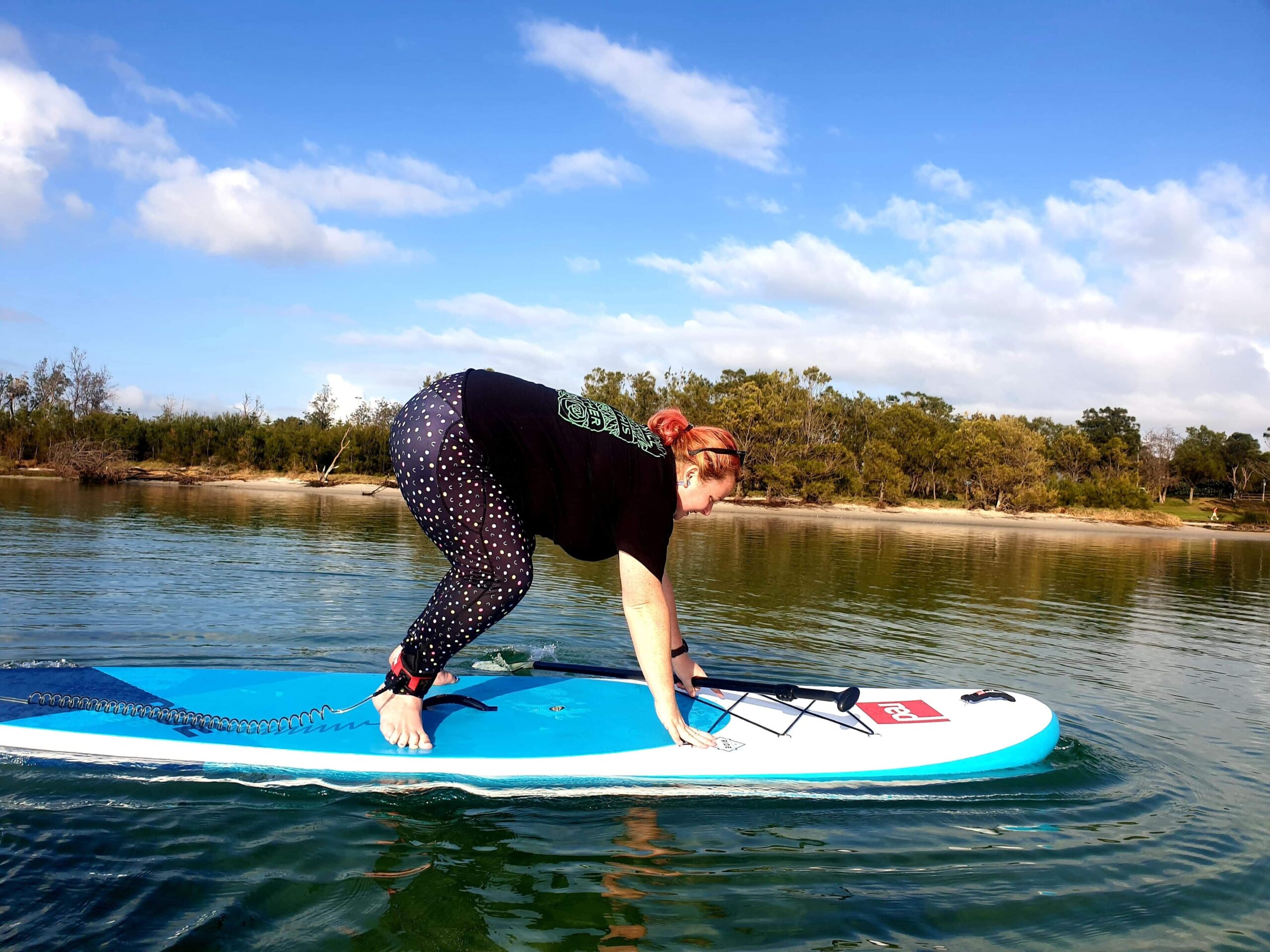 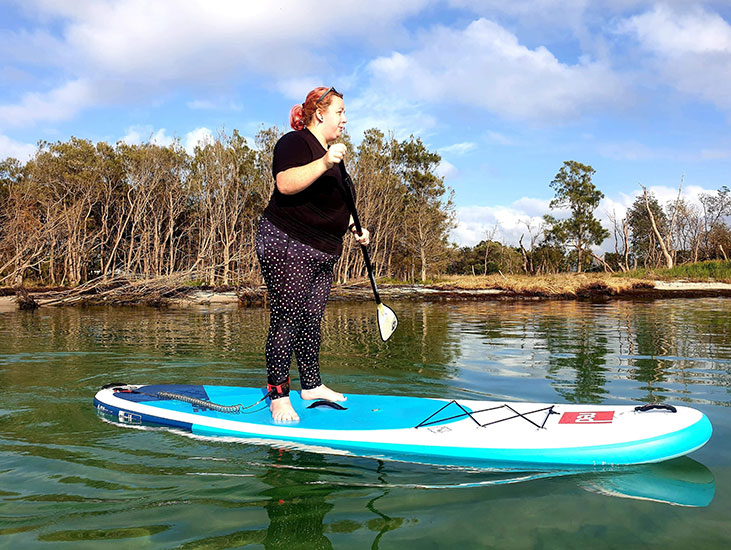 It could, she insisted, and so I booked a lesson and so began my stand up paddle journey. We met Bec by a river nearby, with her Stand Up Paddleboard Shellharbour van impossible to miss that cloudy morning. She pulled out the Ride 10’8” to show me, explaining that the width and length would give me lots of stability and that there was no need to worry about weight.

James and I had been talking about different boards and he was certain that a hard board would be necessary for durability, and when Bec jumped up and down on the Red Paddle Co Ride 10’8, he nodded with certainty. “This is why we need a hardboard. Look at that, an inflatable could never be that rigid!”

That day I took deeper breaths than I had all year. It felt the same as it had when I was in a kayak. The world was calm out on the water, and the familiar rhythm of the paddle whooshing through the water was like a song whose chorus I had forgotten but now never wanted to stop singing.

"That first day I stood up for two minutes, but it was more than enough to show me that this was something that would nourish my body, mind and soul."

My next lesson the water was choppy. A jet ski came by as I tried to stand and in an anxious panic I dropped back to my knees because the thought of falling was too much in that moment. But as I paddled back across the windblown water I reminded myself that I was still in motion, and that was the best way to be. Somedays you stand strong and somedays you shuffle along on your knees, and both of those are okay as long as you’re willing to show up for yourself.

The last lesson was paddling along a little creek that winds along behind houses and even a local bowling club. As we went, we collected little bits of rubbish and wondered how the bigger bits got there (how does a whole table end up in the water?), and for the first time I forgot about the world outside the water and was focused on what was in front of me. There was the whooshing of the paddle in the water, the next plastic bottle to collect, the feeling of balance on the board, and the cool sensation of water occasionally splashing from the paddle onto my arms. My dog, a Cavoodle named Spensa, decided to rush from the shore where James had been walking her, and swim to join me on the board. We paddled along together, her huddled against my legs with curious eyes glancing down at the fish below the board. 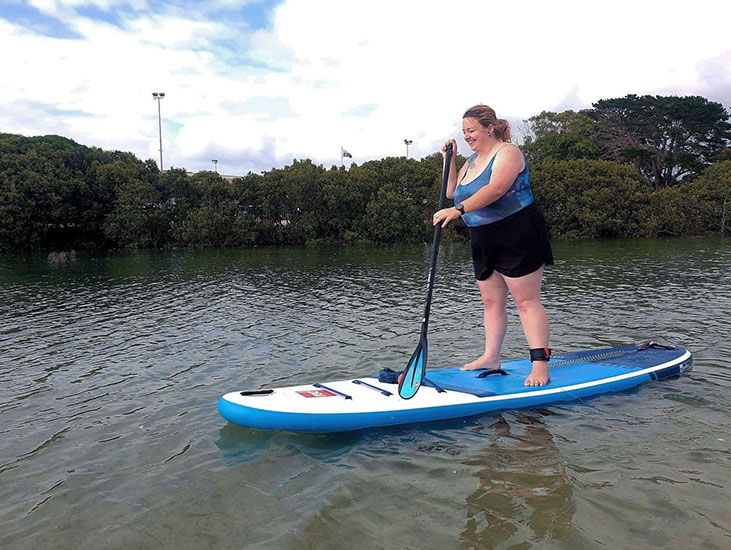 This morning we took a secondhand kayak we bought for James and my very own Red Paddle Co Ride 10’8” for a drive down the highway. We turned off at the exit, marked by trees recovering from the bushfires of last summer, and drove to Swan Lake.

I slid the paddle board into the water, took a deep breath, and pushed off on my knees, then slowly rose to my feet to paddle around the corner towards the creek that the lime green kayak used to explore years before. I moved from standing to kneeling for a while, and on the way back sat down, even lay down, and let the current carry me along the way.

The lake is the same. The fish still swim under the surface in schools of hundreds, tiny darts through the water. There are still occasional eels lurking around like snakes in waiting, making me rethink swimming as an option to cool down. The shore is lined with gumtrees and the boats still drive too fast.

"But I am not the same. I have learned that my body’s limits are not defined by my weight but most often by what I allow myself to think I am capable of. "

And, did you know? Among all the other things that I am, I’m a stand up paddle boarder. Curvy, proud, and more steady on my feet every single time.

A big thanks to Tamara for sharing her SUP story. If you'd like to read more about her experiences hop on over to her blog here. 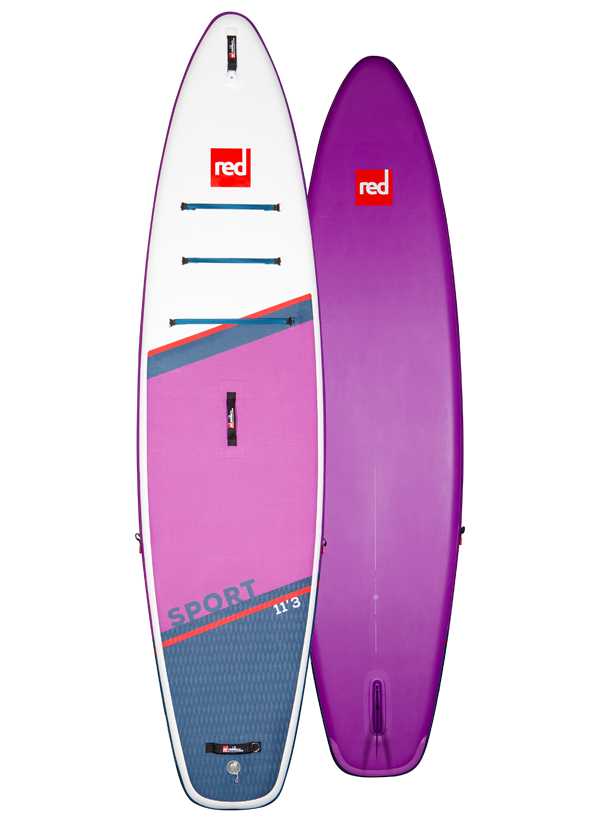 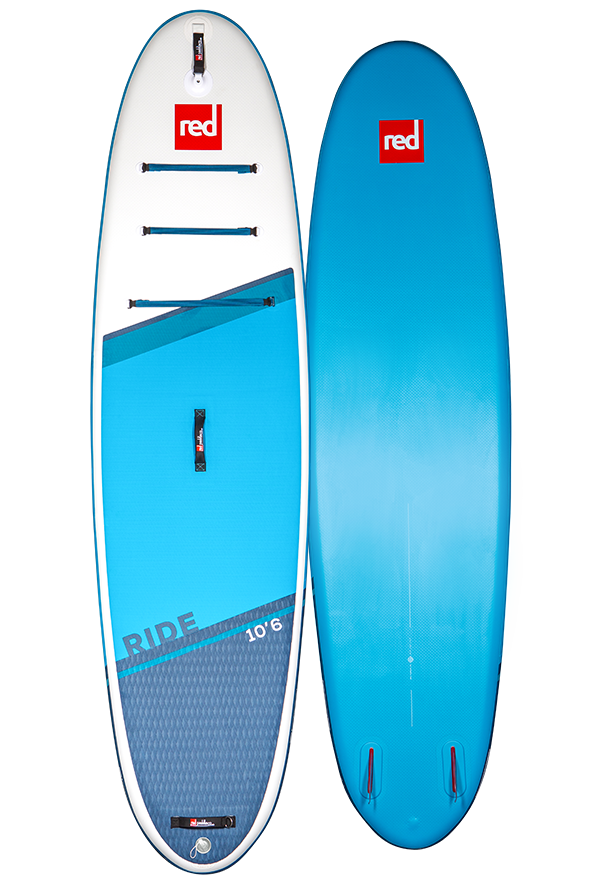 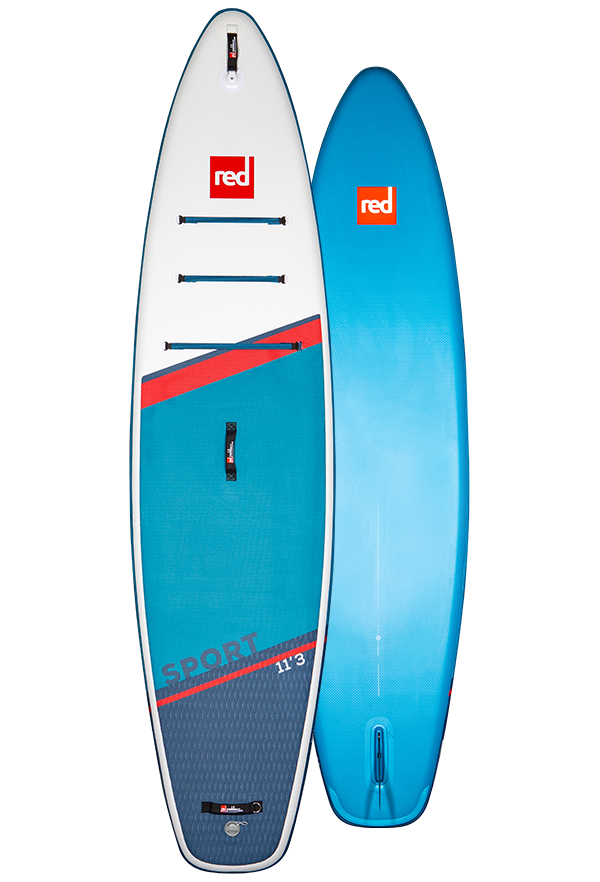