The Yukon River Quest is longest and arguably the most gruelling annual canoe and kayak race in the world. Held in north-west Canada, the race starts in Whitehorse and finishes in Dawson City some 720km downstream. The 250 entrants are given a strict cut off time of just 3½ days to complete the challenge, often having to paddle day and night to achieve their goal.

For the first time ever 12 paddle boarders were invited to enter as an ‘experimental class’ on the premise that if no one completed the race SUP board be excluded from all future events. 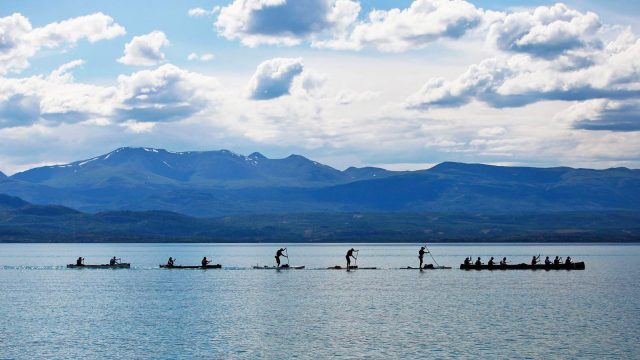 We catch up with André Le Geyt to hear how he got on...

Having done the 11 Cities tour in Holland I had a rough idea of how to train and started to follow a similar plan with the addition of some longer training paddles. I paddled around Jersey on three separate training sessions, which took between 6–8 hours. Alongside paddling, I also did some long cycle rides to strengthen my legs (as they take a real hammering standing for such a long time) as well as circuits, weights and 10 km runs.

Another area I worked on was diet. Paddling for close to 3 days non stop I realised gels and energy bars were not going to be much good. I worked with my friend and nutritionist, Liz Sheehan to get my diet ‘clean’ and focused on foods that would give me a balanced consistent form of energy. This helped me a great deal, as I felt stronger and got out of the sugar cycle of training which made my body work far more efficiently.

With 4 flights each way it would be a real mission to transport a carbon board! After trying a few boards and speaking to the team at Red Paddle Co I was set up with a 14′ Elite board, 3 piece paddle, dry bags and a few other handy kit items. The board was great, I won the 14′ winter series in Jersey riding it, and it was so much easier to travel with. Most of the survival kit I needed also managed to fit into the carry bag for the board which was really handy. And believe me the survival kit list was very long and detailed (the organisers certainly want participants to be safe paddling the Yukon River, as some areas are completely inaccessible and complete wilderness, so you need to be prepared to survive).

I was lucky to have my partner Catherine travel over with me and give me support during the race. We went a couple of weeks early to get used to the time difference, have a bit of a holiday. When we got to Whitehorse we began to realise that this was a huge event! The whole town was buzzing and there was so much talk about whether the SUP's could make it... Was it too far for us? Are we crazy?

Well I planned on making it! We met up with Stuart Knaack a local paddler who runs SUP Yukon, and he showed us around and took us paddling, such a great guy, and worth contacting for wilderness tours in the Yukon. The rest of the paddle crew arrived a couple of days before the start so we could discuss individual plans and tactics. 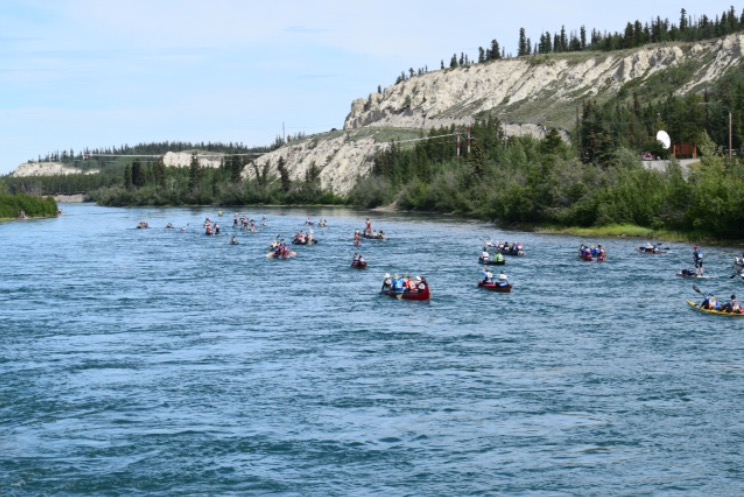 We started at midday with a 400 metre run to our boards. I got a good start but promptly fell in! Having quickly got back on I found myself with local paddler Stephen Waterreus and to my surprise we were not too far behind the lead pack of Bart Kanaha Kai Maui, Norm John Hann and Jason Bennett. We managed to get in the draft of a voyager canoe and set off at a good pace for 3 hours along the river before we hit Lake Faberge (which is nearly 60 km long). Luckily the wind was unusually light and I managed to stay with Stephen and the voyager until halfway along the lake when I paused to grab some food and dropped a glove meaning I had to double back to get it. Rather than attempt to catch up I decided to stick at a steady pace and managed to hop on the draft of a few more big voyagers as they went past. I got to the end of the lake about 10 pm and stopped at the checkpoint to put on some warmer kit for the night, have a good stretch, eat some food and hydrate.

The next stretch was fairly narrow but had a good flow meaning we quickly started eating up the miles as we raced into the midnight sun.It got to twilight but was still light which was really strange but meant I could take in the breath taking scenery that seemed to extend forever infront of me. It was simply stunning; Mountain cliffs, small islands and more trees than I’ve ever seen in my entire life! For a while it was surreal it must have been 50 miles of just burnt out trees where a wild fire must have passed through a couple of months before, I guess this far out they just let the fires burn. The temperature really dropped as morning approached and as I tried to warm up I rounded a bend there was the first stop at Carmacks. It was 3:30 pm and I had been paddling for a solid 27 and a half hours!

I dropped to my knees to exit the water as the flow was strong at the docking point. My thighs were in pieces and I was pretty wobbly as I got off my board. Luckily Catherine and our friend Sandy who runs Aspen Breeze B&B in Whitehorse were both there to steady me and get me up the bank. I was then fed, watered, massaged and off for a few hours sleep.

After a few hours sleep, a shower, kit check, more food, and a re-stock of my supplies - I was off again! It was 10.30 pm. Strangely, I felt pretty good! I paddled into the midnight sun again. Somewhere around 5am it got really cold and there was fog here and there. The river started to widen out with lots more islands to navigate around and in a sleep deprived state the map was becoming harder and harder to read! As the day wore on, it became hotter and hotter and I was starting to struggle finding myself having to take more and more little breaks.

I finally got to the second stop around 6.30pm were I was greeted with sandwiches and hot soup – 'WOW, they tasted so good!' 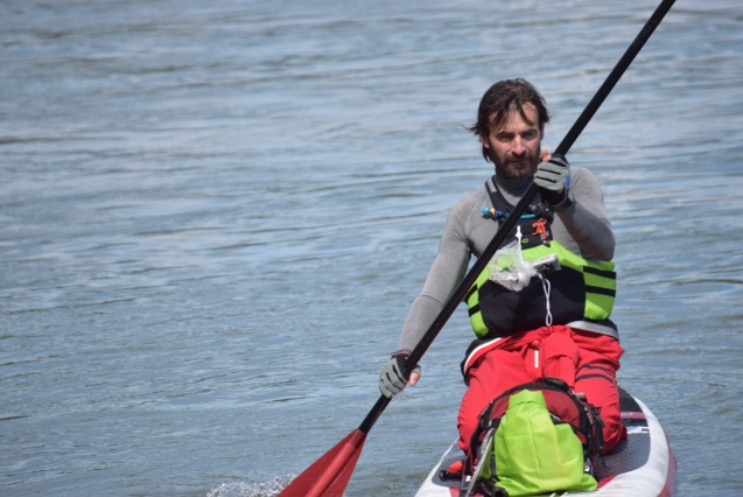 I found some shade, covered myself in bug spray, and got just over an hours sleep. The volunteers wake you up a half hour before your departure time. I struggled once I hit 5 or 6 am, I was so tired even reading the map was near impossible. All the islands started to fade into one, we had hit the white water section and in the early morning light everything looked the same colour. I was starting to hallucinate! It’s quite amazing where a sleep deprived mind can take you. Every tree stump is a bear or a person, floating logs could be crocodiles and cliffs have faces which stare at you and follow you as you go past!

It’s surprising how much you can push yourself. I guess not having anywhere to stop makes you push on. I was getting closer, then the last 30km or so there was a serious headwind! It seemed to get worse around every turn! I started losing it and shouting every bad word you could think of. Then, in relief I made the final turn and could see the finish!

I started to well up. I couldn’t believe I had made it.

Catherine was there at the end shouting me home and helped me off my board, my legs by now just two giant sticks of pain. I was in bits... but I had made it. Some volunteers helped me to sit down, then one of the fantastic volunteers got me a cold beer. It was the best beer I’ve ever tasted!

My hat goes off to the SUP guys at the front who smashed it, and to everyone else who completed the race. This was so hard, so far outside of my comfort zone, it’s crazy but boy did it feel good to make it!

A couple of our crew didn’t make it and I was gutted for them. I know they put in a lot towards this, but it’s such an extreme race that any little thing you could normally shrug off catches up with you eventually. They both pushed further and harder than a lot of people - Next year guys.

Catherine and I met lots of incredible people, we made great new friends, and really enjoyed our time in the Yukon and Canada as a whole. What a great place and so many opportunities to paddle.

Would I go back and do it again? On the river in the heat and in pain I swore no way… but now… hey who knows! But what I do know is that the Yukon River Quest board have now agreed to include SUP as a category for future years.