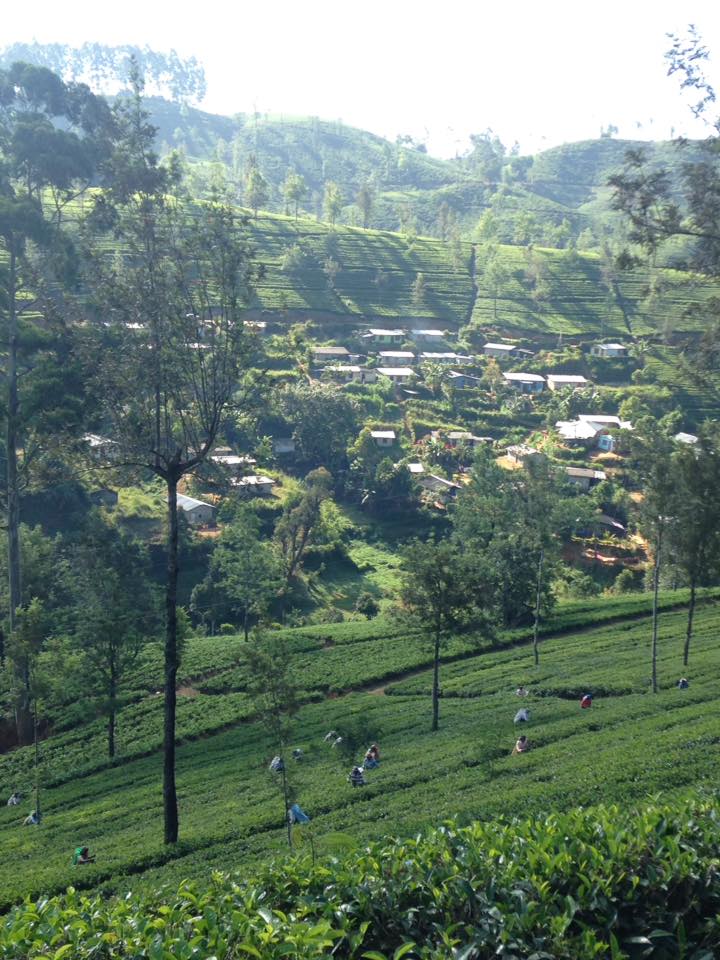 My decision not to put the tarp over me through the night paid off, I was now being awoken by the sun rising over the mountain in the distance. I opened the mosquito net and hung my head out for a while before starting to pack up camp. The gentleman from the house came over and said "come get some breakfast". My third breakfast made for me in as many days, unbelievable. I carried my packed bag over to the house. Eggs, sausage, bread and coffee overlooking Devon Falls, this was pure bliss. By 8am I was saying my thanks with a full belly and heading back in the direction of the road.

It was 35km back to my board, too much to cover today with the late start but should be a comfortable two day hike. The terrain and scenery continued as it had been much to my pleasure. But the road just kept climbing and climbing as the road meandered. On one hairpin bend, a farm worker pointed me onto a tiny dirt trail through a plantation saying "short cut". I decided to take him on his word and climbed the steep hill. Walking past one bush I heard manic screaming and laughter. I came to a gap and saw five boys having a water fight with watering cans, rolling around on the floor. They saw me and came running, screaming all their English vocabulary at me. The 'short cut' was about to take me back onto the same road after a hard climb and descent, but it was worth it to meet those lads.

As the warm morning grew into hot afternoon, I began to weaken. I felt a bit dehydrated so stopped at a tiny house and walked down their front steps to ask for a water refill. The whole family were there and happily invited me in. I drank two litres of water and sat in a comfy chair while the mother brought me out a cup of tea. Young girls were playing a game in the corner which looked like a cross between draughts, backgammon and Chinese checkers. After twenty minutes or so, I decided to plough on, the water had helped but I still wasn't feeling good. Maybe the heat and sun were getting to me. Forgetting to bring a hat or sunscreen with me was pretty damn stupid. I was covering up as best I could, but I just don't think it was enough. 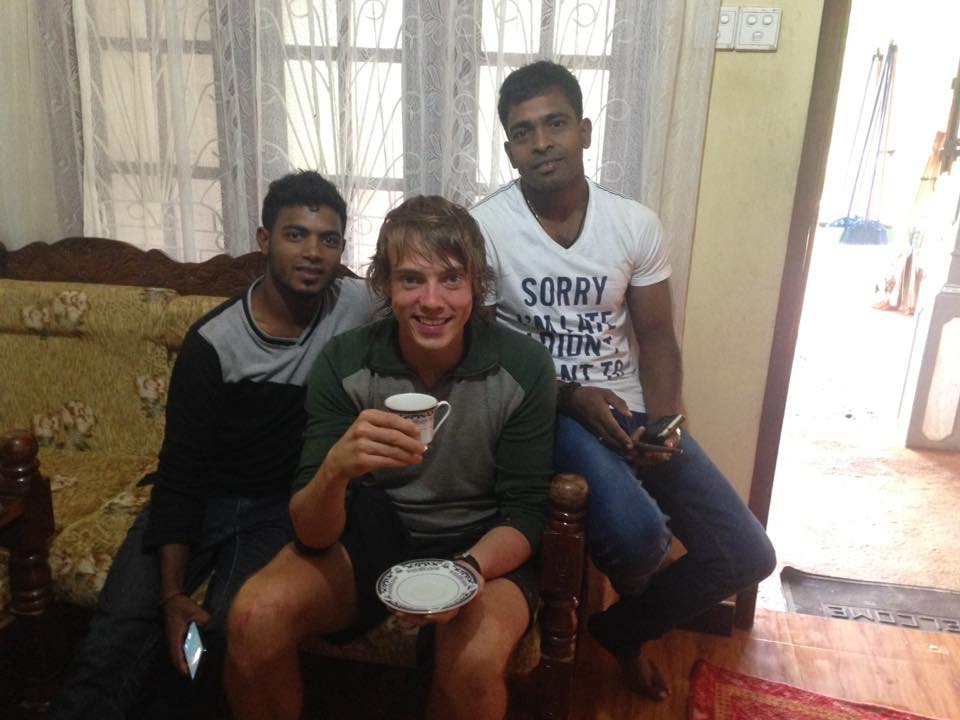 I tried taking another short break but my strength wasn't returning. I needed a proper rest and there was no escape from the equatorial sun directly overhead. I took my boots off, lay down on the side of the road, covered myself in water and draped a top over my face. For an hour I rested while passing vehicles beeped, smiled and waved. I felt somewhat recharged but I knew something wasn't right. Having no appetite or thirst was worrying. I decided I needed to get a big feed inside me. At the next crossroads, 3km down the hill I found a tiny, dirty restaurant with no cutlery. It was self-serve rice and many curries. I ate as much as I could stand. The Sri Lankan people make eating with your hands look very easy and sometimes even elegant. But, it must take some practice because half of mine went all over the table and the other half stuck around my mouth.

The road went uphill again and by 3pm I decided to call it a day, I needed sleep. Up and up the road climbed with no suitable trees to sleep between. I tried speaking to local people but the concept of sleeping in a hammock, regardless of photos and sleep gestures, was just too alien for them to understand. For another 90 minutes I walked until I spotted a row of perfect trees next to a vegetable patch. I spoke to a lady who owner one of the houses nearby and, after five minutes of total confusion, I took it as permission to string up my hammock. I was too tired to continue searching and mentally crossed my fingers things would be ok. 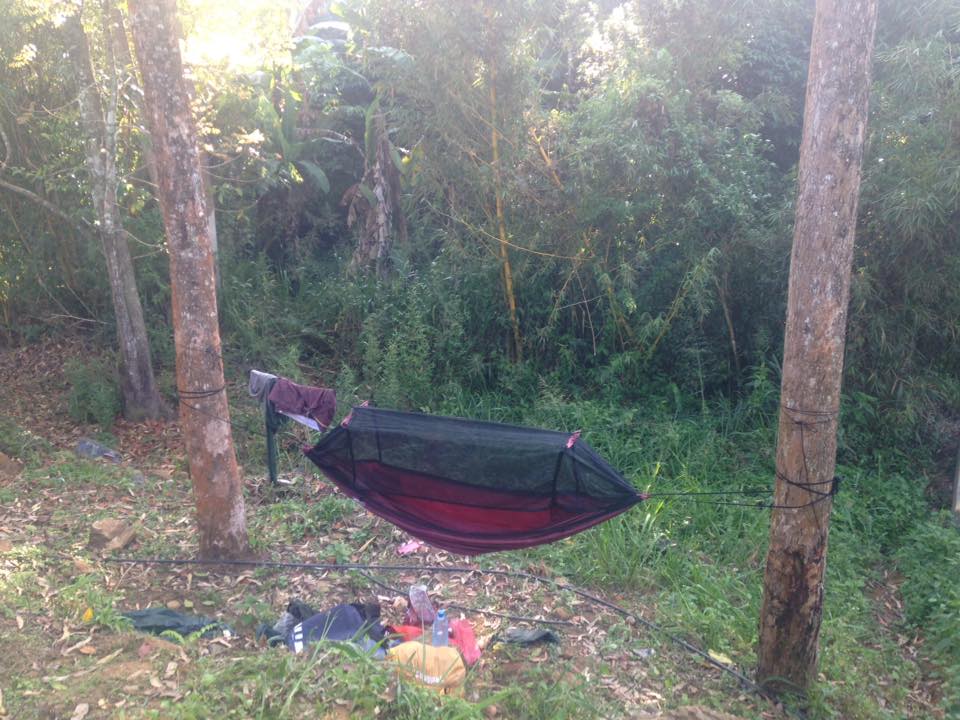 With my camp all set, I fell into my hammock and looked up to see ten people just stood there staring at me. "Hello!" I shouted. A few muttered replies. Children started to get closer and closer, it seemed like they were daring each other to see who could get closest to this monster. A few men came down to ask me some questions and seemed perfectly happy for me to stay here until the morning. The children by now were very bold and all over me. Repeating my name, shouting English phrases and laughing hysterically. One of them brought me down a cup of tea, another filled water bottles while another insisted on giving me biscuits. Sri Lankan hospitality is engrained at an early age! 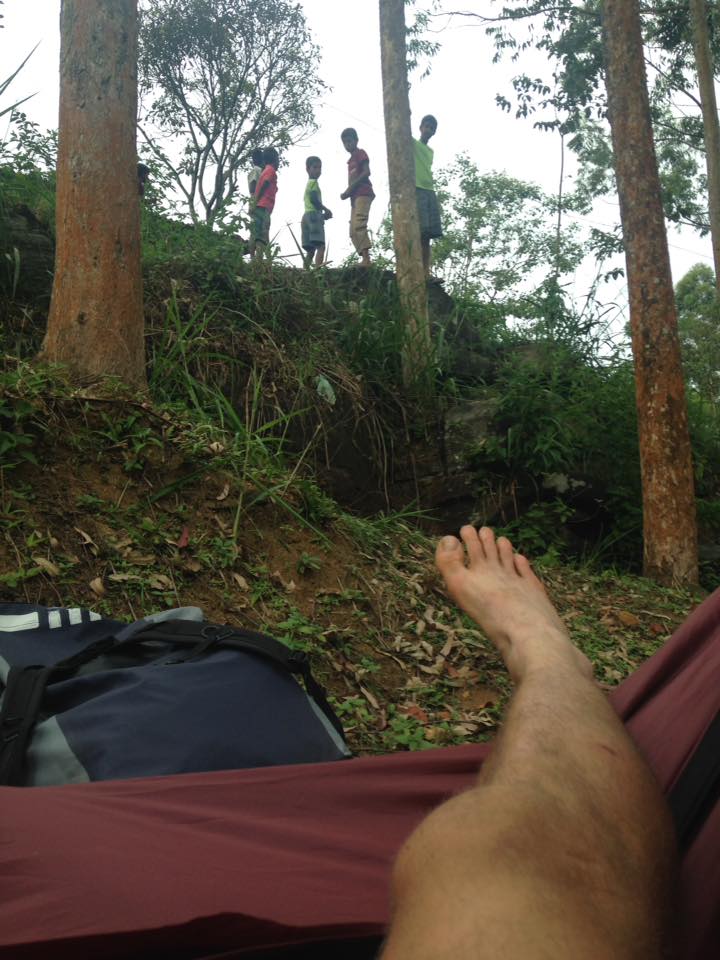 I was starting to feel cold and shivery now, even though it was around 23C. I had no stomach issues so figured it must be mild sunstroke. I forced water and rehydration sachets inside me then climbed back into my hammock. It began to rain so I pulled my tarp over the hammock. Neither deterred the children from their new toy. Five tiny heads were suddenly inside my tarp, inches from my face. High pitched broken English coming from all angles "hello! Kevin! Rice & curry! Cup of tea! How are you! Where you from! I am fine!" It was too cute to be annoyed by. All on repeat for nearly two hours until darkness came and they were summoned inside by their parents.

The silence and darkness was very welcome, my fever was getting worse. It took every ounce of energy to climb out and find some painkillers for my splitting headache. I fell in and out of sleep for some time and knew the cold sweats were coming.